24 September 2022 Current Affairs: we share daily updated Current Affairs. This topic is the most important part of all competitive exams. Read Carefully this post. Most questions Coming related to this Topic in Exams. CA

Ques 1. Who is representing the Global Clean Energy Forum from India’s side?
Ans. Jitendra Singh

Ques 3. Sibi George has been appointed as the Ambassador of India to which nation?
Ans. Japan

Ques 4. India has signed an MoU with which country to enhance cooperation among defense industries.
Ans. Egypt

Ques 6. Which bank has been removed from the PCA framework by RBI (Reserve Bank of India)?
Ans. Central Bank of India

Ques 8. The JIMEX 2022 military exercise between India and which country’s navy has started?
Ans. Japan

Ques 9. Raju Srivastava has passed away, who was he?
Ans. Comedian

Ques 11. Who has written the new book ‘Will Power’?
Ans. Sjoerd Marin

Ques 13. Who has been appointed as its brand ambassador by UAE’s leading healthcare company Burjeel Holdings?
Ans. Shahrukh khan

Ques 14. Which country has been issued a rescue and evacuation warning due to Typhoon ‘Nanamadol’?
Ans. Japan 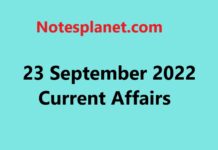